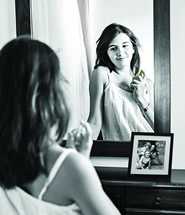 I was 13 when I became friendly online with John. It was in a chat room for 13 to 18-year-olds. John said he was aged 15; Around this time I was feeling really low about myself; my gran had died 3 months earlier and I had been very close to her. I don’t think my parents realised how much I missed her.

Because I was feeling a bit low I knew I was being a little quiet with my friends at school so I suppose they lost a bit of interest in me; in fact, they weren’t particularly kind to me.

John seemed to understand and I could see that I was becoming emotionally attached to him. He would tell me that I sounded like a “beautiful” person. I found this a bit strange at first but then grew to like it.

After a while John began to talk to me about ‘gently touching’ myself. By then he had been so nice to me, so understanding, that I felt I should do it. After a few days he sent what I now know were obscene text picture messages; he asked me to do the same. I’m ashamed to say that I did send some but immediately felt really bad about it. I felt dirty.

Things changed quickly after that and I became frightened when John put increasing pressure on me to send more photos. He seemed to change then, threatening to show the photos to my parents if I didn’t do what he said. I felt I had no choice and lived in terror for 7 months before the abuse ended.

I saw something on TV that made me realise this couldn’t be right. That’s when I started to say something to my friend, Alice, who lived near me. I only told her bits at first, then a little more. Alice told me I needed to tell my parents; I couldn’t – I felt so ashamed. I felt angry with her at first when I found out she told her mum who then told my mum. I’m glad now that she did. It was all out in the open and the police were involved.

It turned out John wasn’t 15 – he was 25. This somehow made me feel even worse. I am so confused about it all but I am receiving some support to work through all of this and I think I might just be able to get my life back on track.