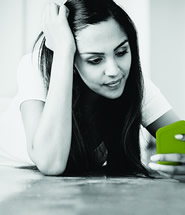 I was 14 when I first went into a children’s home because of what went on at home – mum and dad always seemed to be drunk.

After a few months of being in the children’s home I met Dan one day outside the home; he was 19 and pretty cool. We swapped mobile numbers and we texted a lot, even into the early hours of the morning.

Dan told me he really liked me and invited me to a party at his friend’s house a few nights later. He said it would be a great night. I think the others in the home were a bit jealous and I felt great because Dan was so good looking.

When we got to the party Dan introduced me to some of his friends. They all seemed a bit older than Dan but that was ok. Everyone seemed to be drinking so when Dan offered me some drink I took it. I must have drunk quite a lot over the next hour because I could barely walk when I realised that Dan was helping me upstairs and into a bedroom.

The next thing I knew I was lying on a bed and my jeans and pants were off. I think I had been unconscious for a while. Dan came into the room and said we were leaving to go to another party. I said I would rather go back to the home but he seemed to ignore what I said. He pulled me off the bed and told me to get dressed. I followed him down stairs and into a taxi that was waiting outside.

About 5 minutes later we arrived at another house. I had no idea where it was. Dan led me into the house and straight up the stairs. I started to cry but Dan told me to stop being such a kid. He handed me some drugs and told me to take them – that it would make me feel better. I did what he said because I didn’t want to look like a kid to him.

Before I knew it Dan led me into a bedroom. He closed the door behind me and as I turned round there was another fella in the room. I knew then the drugs were starting to take affect but not enough to numb the pain of 3 more fellas having sex with me; one straight after the other. When I finally got away I realised that had been Dan’s plan all along.