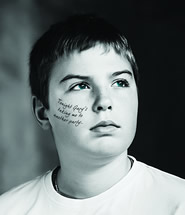 Growing up wasn’t a particularly happy time for me. My social worker described me as a “troubled child” whatever that meant!  I had witnessed severe domestic abuse between my parents from a young age.

After my parents split up my mum had a number of partners, some of whom were also violent towards her. One of them made me watch pornographic films with him and tried to do sexual things to me. The social workers suspected something was going on because he left soon after that; but there were more men.

Although I wasn’t attending school much, one of the teachers raised concerns about me being in the company of much older men within the local community.  They were right but I wasn’t going to admit that. I would get to know one or two of them just by hanging around – just trying to stay out of the house really. These men would have been in their 20s, 30s and 40s. They seemed friendly at first; gave me some of their cider, cigarettes or any ‘blow’ that was going.

It wasn’t long before one of them asked me to go into the local toilets with him. I kind of knew what he wanted but just seemed to go along with it because I was pretty drunk. Although mum’s boyfriends had done sexual things to me this was the worst yet. Now I know that it was rape. I was only 15 and he had made sure that I was drunk so that I couldn’t put up a fight.